Just like our work on Capital, we need to know everything about Deutschland 83 - from textual analysis of key scenes to how it was funded, distributed and promoted. The notes from the lesson are here:

The Cold War was a political dispute between the Eastern Bloc (the Soviet Union – Russia and 14 other states) and the Western Bloc (USA and NATO allies including the UK). It took place from 1947 to 1989.

There was never large-scale fighting between the two sides but on at least two occasions the world came close to a fully-nuclear World War 3.

The Berlin Wall was a symbol of the Cold War, constructed after the Berlin crisis of 1961.

It divided Communist-controlled East Berlin and NATO-supporting West Berlin. East Germans were not allowed to cross the border for a better life in the West – many were shot trying to climb over the wall.

The Cold War almost boiled over into nuclear war in 1983 when a NATO exercise called Able Archer caused some politicians in East Germany and the Soviet Union to believe the USA was planning a nuclear first-strike.

We will watch the CSP episode - Season 1, Episode 1 - in class. It is also available here on the All4 website for streaming Channel 4 programmes.

Work through the following tasks to build a detailed case study for Deutschland 83. This will give you plenty of background information to use in an exam question. Remember, for this CSP the question could be on any of the key concepts: language, industries, audiences or representations.

Read the following reviews and features on Deutschland 83:

1) What positive aspects of Deutschland 83 are highlighted in the reviews?

2) What criticisms are made of the show?

3) Why did the Telegraph suggest that Deutschland 83 did the 'period' aspect of 'period drama' so well?

4) Find three 'below the line' comments from either of the Guardian articles. What did the audience think of Deutschland 83? Do you agree with the comments?

1) What does Jonas Nay say about growing up in a united Germany?

2) The Channel 4 News interview is conducted in German with English subtitles. How does this reflect Channel 4's remit as a public service broadcaster and their target audience? (Clue: revise your work on Channel 4 and Public Service Broadcasting here!)

3) Interviewer Matt Frei asks about the current political situation in Germany. Why might this interest the Channel 4 News audience?

Behind the scenes clips

The All4 website has a range of clips from behind the scenes of Deutschland 83. Watch the following:

1) Why should audiences watch Deutschland 83 - what does the clip offer viewers?

2) Why is history an important aspect of the appeal of the show?

3) What technical aspects are highlighted in the video?

1) Why were the set design, costume and props so important for Deutschland 83?

2) How historically accurate was the setting, costume and props?

3) Why were the props, costumes and music such a key audience pleasure for Deutschland 83?

1) The opening of the trailer uses sound and editing to draw the audience in. Explain why this is effective.

2) What audience pleasures are suggested by the trailer? Think about Uses & Gratifications theory (Blumler and Katz).

3) How does the trailer use action and enigma codes (Barthes) to encourage the audience to watch the show?

4) Pick three shots/scenes from the trailer that capture the spy thriller sub-genre. Why might this appeal to an audience? Try and apply Neale's genre theory 'repetition and difference' (the original notes on genre theory are here).

5) Pick three examples of mise-en-scene from the trailer that capture the 1983 setting the confirm the sub-genre of period drama. Why might this appeal to an audience?

6) The trailer uses the song 'Two Tribes' by Frankie Goes To Hollywood. Why did the producers select this soundtrack for the trailer?

7) The only words heard in the trailer are in English. Why do you think the UK trailer avoided subtitles or German dialogue?

Deutschland 83 was produced by German production company UFA Fiction and distributed internationally by FremantleMedia International. It was broadcast on RTL (Germany), SundanceTV (US) and Channel 4 (UK) as well as many other broadcasters around teh world.

1) Read this Freemantle Media press release on the worldwide success of Deutschland 83. How is the drama described by the distributor? Why was it considered such an international success?

3) How does the press release promote the Channel 4 'Walter Presents' collection of international TV drama?

Watch this Channel 4 trailer for their Walter Presents international drama.

1) How does Channel 4 introduce 'Walter'?

2) What audience are Channel 4 trying to appeal to with the 'Walter Presents' series?

3) How does the 'Walter Presents' series reflect the changing nature of television in the digital age?

Look at the online Channel 4 press pack for Deutschland 83.

3) Read the press pack interview with writer Anna Winger. How did she use the historical context and real-life events to create a successful drama?

4) Anna Winger discusses the use of music. Why might the soundtrack attract an audience? 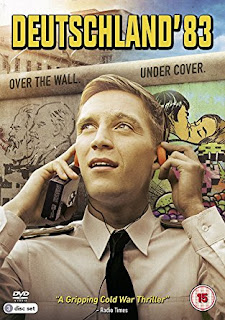 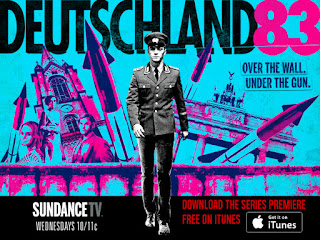 1) How does the UK DVD cover communicate the sub-genre of the drama?

2) Analyse the mise-en-scene in the UK DVD cover. What does it communicate to the audience?

3) How does the American branding use font, colour and graphics to appeal to an audience?

4) Why might the distributors Freemantle Media International have used different marketing campaigns in different countries?


There is a lot of work here - allow at least three hours to get through everything. Remember: this is an in-depth CSP so you need to know every aspect in real detail. You'll get a chance to work on this in lessons but will need to finish for homework - due date confirmed by your coursework teacher.
Posted by Mr Halsey at 8:24 AM